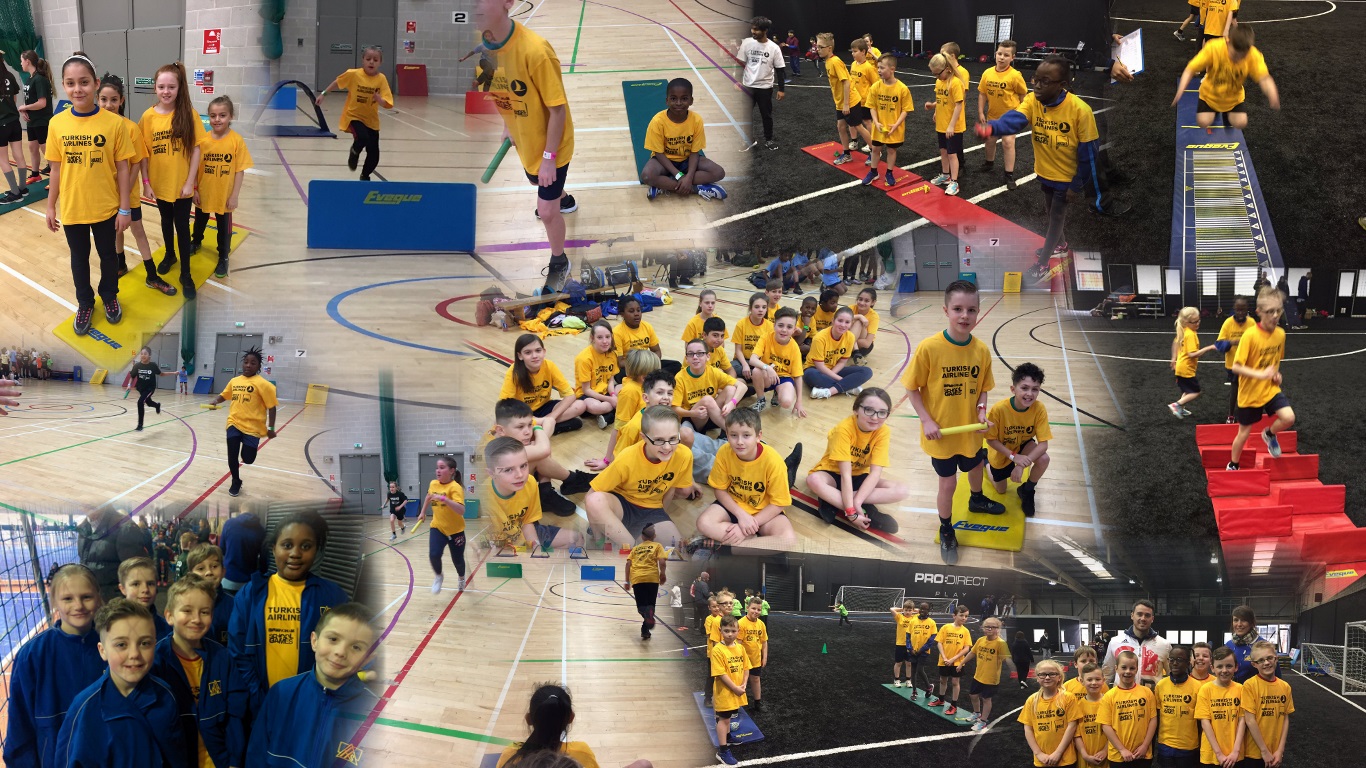 Physical activity not only improves health, reduces stress and improves concentration, but also promotes correct physical growth and development. Exercise has a positive influence on academic achievement, emotional stability and interaction with others.

At Hillstone Primary school we believe that a child, who is physically active, is a happier child. The early years of a child’s life builds the paving blocks to fundamental skills for future activity, developing agility, balance, coordination and sport specific skills. Sport and Physical Education promotes health and exercise and means our children will be more likely to be active adults. Not only does sport have physical benefits but it also develops their social attributes, improving their confidence, teamwork and communication skills. Sport helps to install a ‘growth mind set’ in children, helping them to deal with failure and mistakes and to understand that these are needed to improve and should be celebrated. Sport gives children a practical way of experiencing this.

On Wednesday 25th May, eleven of our year 5 and 6 children competed in a school games tag rugby competition. There were eight teams that attended the competition which took place at Birmingham Exiles RFC.

After a slow start, and a couple of unforced errors, our children got into full flow towards the latter stages of the first game- winning that game 3 tries to 1. From this point onwards our children got better and better, and all their hard work in training was paying off. We ended up up winning all of our games. Our children not only played brilliant rugby, but they also showed fantastic sportsmanship- rotating positions and playing with a smile on their face at all times.

We ended up winners of the event- and to top it off Maryam was named player of the competition.

Well done to all of our children who competed. They did themselves and our school proud.

On Thursday 19th May, nine of our children competed in the Para Sports Hall Athletics School Games Finals. Our children had already won our ‘area’ event to qualify for the finals. On the day, our children performed briliiantly and showed fantastic sportsmanship. We were named Bronze medal winners- meaning we are the third best para athletics team in Birmingham!!

On Wednesday 30th March, our girls football team took part in their last three fixtures of the season. To have a chance of winning the title, we would need to win every game and hope for a couple of the other scores went in our favour. We won two of our three games, and drawing our last game 3-3. We finished in 3rd place overall in our league. More info here https://espsfa.pitchero.com/match-info/tables?table_id=d-4251357

On Tuesday 29th March our boys football team took part in their fifth league fixture of the season, playing away against St Barnabas. In a tight, scrappy game we come out 1-0 winners, to remain unbeaten in the league. For more info see here https://espsfa.pitchero.com/match-info/tables

On Wednesday 2nd February our girls football team took part in their first league fixtures. After a slow start, losing our first two league games, our girls picked up their performances and won the next 3 games. With it all still to play for, our girls will need to carry on their form into the next set of league fixtures on Wednesday 16th March. Well done to all of our girls.

On Tuesday 16th November, we took 2 basketball teams to a School Games Event. Our B team played 6 games, winning 4 and losing 2. Our A team played 6 games, winning 5 and drawing 1 game. Well done to all of our children who took part. they had a On Tuesday 12th October our boys played in their first football league game in the best part of 18 months great morning and did themselves proud.

On Wednesday 30th March, twenty three of our children competed in the indoor athletics school games finals. They performed exceptionally- and were just ‘pipped to the post’ by a brilliant Wylde Green Primary team- winning silver medals. Although disappointed to not come out with a gold place finish our children were chuffed with their success.

Thursday 23rd March – Both team played severn matches. Hillstone Blue, won 6 and drew 1 game. Hillstone red, won 5, drew 1 and lost 1. Our children played brilliantly – with a smile on their face, and really seemed to enjoy this opportunity, which many have gone without over the last 18 months due to the pandemic.

On Thursday 10th February, eleven of our children competed in a range of indoor athletics events. They completed field events, such as the standing long jump, javelin, speed bounce and chest push. They also competed in races against other teams. Our team were named overall winners and will now go onto the School Games Finals in the Summer term.

On Tuesday 23rd of November, twenty three of our year 5 and 6 children took part in a sports hall athletics competition at Nechells Leisure Centre. This is a School Games Level 2 event, in which you compete against teams in your local partnership. If you win the event you then get the chance to represent your partnership in a School Games Finals after Christmas.

On Friday 5th November, eight children took part in a Panathlon event. This is where children rotate in their teams around different games trying to score as many points as possible. Our children had a great time and even managed to pick up certificates and medals!!!

On Tuesday 12th October our boys played in their first football league game in the best part of 18 months. We won the game 2-0 playing against Featherstone. Well done to Charlie and Maryam who both were awarded ‘players of the match’.

Well done to our year 5 cricket team who took part in the first face to face sports event in the best part of 18 months. All children had a great time and performed brilliantly winning 2 out of the 3 games they took part in.

On Monday 9th March our boys football team played against Timberly School in a league fixture. Our children won the game 9-1, maintaining their 100% record in the league.

On Monday 3rd February our girls football team took part in 6 aside competition at Aston Villa F.C. Our girls went undefeated, winning 4 and drawing 2 games. Well done to all of our girls who participated.

On Monday 20th January our boys football team took part in the first round of the 9 aside format HMS Cup. Our boys won the game, beating Lyndon Green 4-2. They now qualify for the next round.

On Monday 13th January, nine girls from year 3/4 represented Hillstone in a School Games level 2 event. After performing our vault and floor routine, we were given some fantastic feedback from the judges and were named winners of the event. We now go through to the School Games Finals in March.

On Monday 2nd December our boys football team won the ESPSFA cup. Click here to read about our great success.

On Wednesday 20th November our girls football team competed in their first four league fixtures of the season. We won all of our games and sit at the top of the table.

On Wednesday 13th November 7 children took part in a SEND football competition at Nechells Leisure Centre. They won all but one game. They will now go onto the Winter Games Finals in March to represent our partnership.

On Monday 14th October 10 children from year 3 & 4 took part in a football event at Aston Villa. Our children drew 2 games and won 3. Well done to all of our children who took part.

On Tuesday 5th November our boys football team competed in the espsfa cup qualifiers. We won every game without conceding and now go onto the finals on Wednesday 13th November.